Enneagram or the King without Crown 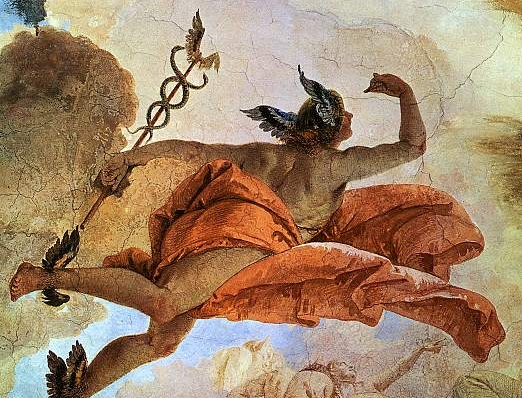 Hermes / Mercury, God of commerce and thieves finds its place in the 8th sphere of Kabbalah, named Hod, symbolizing Pure Intelligence and the power of conceptualization.

This 8th sephirah corresponds to the type 7 of the Enneagram,

In its luminous aspect, Hod corresponds to the power of conceptualization, of intelligibility of man, to his power of discernment and knowledge (the caduceus) enabling him to communicate with the most subtle plans of the Divine.

In its obscure side, it refers to a notion of excessive logic, doubt and rationalization, wandering, blindness, illusion, lying, cunning, distortion and travesty of reality. Man remains hermetically closed to the divine spheres and to the essence of things (C. R. Payeur).

How does this fact that these wonderful keywords appear in any textbooks and courses of Enneagram refering to Kabbalah ?

And what about the gluttony ranked in type 7 ?

Or is it still this thief of Mercury who stole the crown from his rival father, the good, powerful and magnanimous King / Jupiter, attributed to Hesed, the 4th sephirah, and corresponding to the type 3 of the enneagram and of which a few key words, according to CR Payeur: Grace, righteousness, obedience, conformism, idolatry, superficiality, hypocrisy, excess zeal, enthusiasm, productivity, abundance, fructification, insecurity, greed, gluttony, waste.

By what skillful subterfuge the 7 is described in the Enneagram as a rude gluttonous, and planner, well in his life and in his sneakers. ?

Why Ichazo’s description of the schizotypal , how precious, concerning the 7, according to the DSM 4, is obliterated from the textbooks: phobia and social embarrassment, shyness and complexity, cognitive and perceptual distortions, magical thinking, attraction for the paranormal , etc. (the 7 Yin type according to us).

How many people  type 7  I have met , very often men, who are classified in type 3, or 5 or 6  by default, of these  multiple knowledge and subtleties peculiar to the enneagram.

What about those many keywords distributed pell-mells around the enneagram, like an unbelievable deck of cards?

Will the Enneagram one day give birth to all its secrets?

Type 3 is identified to his persona. He lost contact with his true Self. The persona is a part of the collective unconscious that is appropriated so as to be socially acceptable. One conforms to an image, to a model in an exaggerated way, one passes his personal worries after the collective needs. The good King / Hesed put himself at the service of his people. He is upright and has only one word and does not like to disappoint. He identifies himself with the task to be accomplished which in general is Olympian.

Hod / type 7 symbolizes the power of conceptualization and mentalization (Mercury). He has multiple projects that he has difficulty to follow, he disperses and struggles to follow his commitments. His vision is fragmentary and linear. (Left brain / mental-analytic)

Hesed / type 3 symbolizes the power of synthesis and anabolism (Jupiter). He slaughters a ton of work by excessive conformity, anticipation and excess zeal. His vision is panoramic, global and synthetic. (Right brain / mental-synthetic )