Anger in all its forms !!

I would like to make with you a little journey through the Ennagram,  to can explore the Anger in all its forms  and see where we can find it, in its   purest remotest  corners, where we even cannot imagine to find it. In life anger takes so  many forms, so as in Enneagram, that becames a good place  to  hide and seek and dress up its best disguise…

First at all, the Anger, from my early learning, was stated to be in the Gut Center, that is not completely wrong as we  henceforth know  that the type 8 and 1 are on the taoist element of Fire that correspond to the red Anger in opposition of the Wood that corresponds to the green Anger and to the type 7 and 2 .

Considering the Hippocratic elements we can see also that the 8 and 1 are on the bilious  Temperament, called also Choleric Temperament. 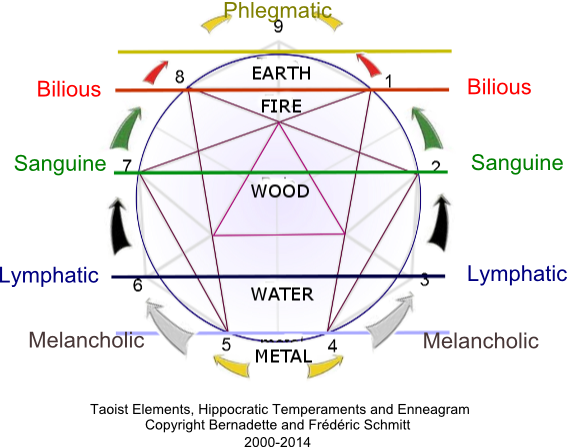 Thus a brief overview show us already that the 1,2,7,8  types are directly connected to the Anger.

Let us roll up our sleeves, and go for a little  descent into the bowels of Enneagram !

Here is the 4, last type seated in the Center of the Anger , according to the sufi, on the point called, excess of Bile/anger. The Bagua shows also the Wood Yin Element for the 4 that corresponds to suppressed anger and irritabitlity. We can find for the 4 a lot of Anger and mainly suppressed anger that is reinforced by the fact that 4 is also on the very withdrawn  taoist  Metal/melancholic Element, quite  a program for the 4 !!!

For him the Bagua indicates the Trigram ” the Thunder” that correspond to the Wood Yang (expressed Anger ), so as the Tree of Life with the Sphere of Hesed representing a King on the throne and the Planet JUpiter ! Zeus … the God of thunder!

What else, before closing the lid !!!

Of course we could say that the 5, 6 and 9 are a priori more quiet and peaceful, mainly the very centered 5, among the all, and his cousin the peaceful  9, but actually no, if  we consider the famous Subtype Vajra or SX/male, that I would like to present to you more… and that can be combined with EVERY  types !!!

The SX/Male Subtype or VAJRA Family

About two years after we had started our research and had examined several hundred clinical cases according to our energy-based method, we realized that what we defined as sexual subtypes, were actually two very distinct characters, a more masculine and a more feminine one. We agreed to name them Mars and Venus in reference to the symbolism of these gods of Greek Antiquity.

This Sx/male Subtype, called also VAJRA, that means the Thunder in Sanskrit.

“Of the many methods for understanding and working with the energies that pervade our existence, one of the most profound is the “five Buddha families,” an ancient Buddhist system of understanding enlightened mind and its various aspects. The five Buddha family framework is an instrumental component in Buddhist Tantra, a path of working with and transmuting mind energy.

The Buddha families are traditionally displayed as the mandala of the five Tathagatas, or Buddhas. The mandala (from the Sanskrit for “circle”) aids meditators in understanding how different aspects of existence operate together in an integrated whole. Each of the Buddhas in the mandala embodies one of the five different aspects of enlightenment. However, these manifest themselves not only as enlightened energies but also as neurotic states of mind. The Buddha families therefore present us with a complete picture of both the sacred world of enlightened mind and the neurotic world of ego-centered existence. We see that they are indeed the same thing; the path of awakening is what makes the difference”

In the early 1970s Chögyam Trungpa Rinpoche taught for the first time these traditional system of the five wisdom energies to contemporary American practitioners as a way of understanding who we are fundamentally: our personality, our emotional landscape, and how we relate to others and our world. He promoted the understanding that there is nothing inherently wrong or bad about the energy itself. He taught that to bring the wisdom energies to the path, we first learn to stay with them through mindfulness and awareness. Then we can work with these energies as they arise in our experience by applying loving-kindness. We allow them to express themselves openly rather than trying fruitlessly to manipulate and control them. The energies then become a way of celebrating our strengths and working with our weaknesses.

Vajra Family in the Buddhist tradition corresponds to Anger and Fear and to Clarity of mind  and Peace in its awakened aspect.

Wisdom family : Vajra . “The first Buddha family is the Vajra family, which literally means the family of sharpness, crystallization, and indestructibility. In the ordinary world, the experience of Vajra is perhaps not as extremes holding razor blades in our hand, but at the same time, it is penetrating and very personal. It is like a sharp, cutting, biting-cold winter. A person in the Vajra family knows how to evaluate logically the arguments that are used to explain experience. The neurotic expression of Vajra is associated with anger and intellectual fixation. If we become fixated on a particular logic, the sharpness of Vajra can become rigidity. We become possessive of our insight, rather than having a sense of open perspective. Clear water suggests the sharp, precise, clear reflectiveness of vajra wisdom. In fact, Vajra wisdom is traditionally called the mirror like wisdom, which evokes this image of a calm pondor reflecting pool” (Chögyam Trungpa, Journey without a goal).

This particular subtype can be confounded with the type 8 and 1 of the Enneagram and also we can find some cases of 4, who are actually Sx/male Yin or  Jungian Introverted Intuition (see our article  on this blog on Frida Kalho and Johnny Depp )

This subtype is also related to the Jungian Function of Intuition and to the  Rigid character structure of Wilhem Reich.

Some famous cases of Sx/Mars :

A complete and in depth article will be published very soon in EM : ” Subtypes : for a paradigm shift and integrative view “.

This article will  re define types and subtypes in that sense: